Taylor Swift kills off her old self, lashes out at Kim, Kanye, Katy Perry AND mocks Tom Hiddleston in Look What You Made Me Do video

TAYLOR Swift’s new music video has been branded an “epic revenge” track after she hit back at criticism and appeared to settle scores with old celebrity foes, before killing off her old reputation and emerging as a new person.
The 27-year-old debuted the video for new song Look What You Made Me Do during the MTV Video Music Awards and immediately broke the internet as fans lavished praise on the superstar and pointed out the various subtle and not-so-subtle jibes within the glossy promo.
With nods to her famous squad, accusations she always plays the victim, swipes at ex-boyfriends including Tom Hiddleston and Calvin Harris, and apparent jibes at the likes of Kim Kardashian, Kanye West and Katy Perry, there’s no shortage of talking points in the Joseph Khan-directed video.
She quite literally rises from the dead and blasts away her old reputation, singing: “I got smarter, I got harder in the nick of time.”
Here’s just a few things about the video that have had Taylor’s fans talking today.

Taylor pokes fun at her model-heavy circle of gorgeous friends by pretending to build her plastic pals in a factory, creating each one to the same slim and tall specification.
Wielding a whip and clad in head-to-toe latex, a very sexy looking Taylor directs her girls from a platform while they all stare at her with blank faces.
Hammering the whole scenario home are screens behind the pop star flashing up the word ‘squad’, famously used to describe Taylor’s girl group.
Eagle-eyed fans have also spotted another scene where Taylor, dressed as her music video character from You Belong To Me, wears a T-shirt emblazoned with the names of celeb pals including Selena Gomez, Gigi Hadid, Lena Dunham, Blake Lively and Ryan Reynolds, suggesting that’s Taylor’s way of naming her true pals.

Taylor reclines in a bath tub filled with diamonds and sings, “I don’t like your perfect crime”, which had some fans wondering if that was a reference to Kim Kardashian’s armed robbery ordeal.
The $1 bill lying on top of the diamonds could be a nod to her legal battle with radio host David Mueller. She won a sexual assault case against him earlier this month and was awarded a symbolic $1 in damages.
She also jokes at one stage about “getting receipts… gonna edit this later” which fans took as a swipe at Kim releasing a phone call between Taylor and Kanye last year, in a bid to prove Taylor had approved of the lyrics to Kanye’s track Famous. Taylor has said she wasn’t informed of the song’s full lyrics.

Megan Franklin @megelfrankz
Hold tf up is Taylor alluding to Kim K’s robbery when she’s laying in a tub full of diamonds
9:51 AM – Aug 28, 2017

ts @sparksfIys
i just realized the taylor that said “getting receipts.. gonna edit this later” is like shading Kim cause of the Snapchat “receipts”
7:00 AM – Aug 28, 2017

Twitter Ads info and privacy
Taylor also uses the phrase, “I would very much like to be excluded from this narrative” at the end of the video, which is the phrase she originated last year in response to the leaked phone call.

Fans are convinced that a leopard print-clad character who crashes her car amidst a swarm of paparazzi while clutching a Grammy is a subtle dig at Katy Perry.
They’ve also suggested the lyric, “Locked me out and threw a feast” is alluding to Katy’s track Bon Appetit.
Others wondered if the animal print heavy scenes are a reference to Katy’s song, Roar, which featured a music video set in the jungle, and whether the fact she’s holding a Grammy is a dig at Katy never having won one.
And if the fact Taylor is sabotaging a plane in her music video is meant to suggest she was responsible for downing Katy’s plane in the Roar promo.
View image on Twitter 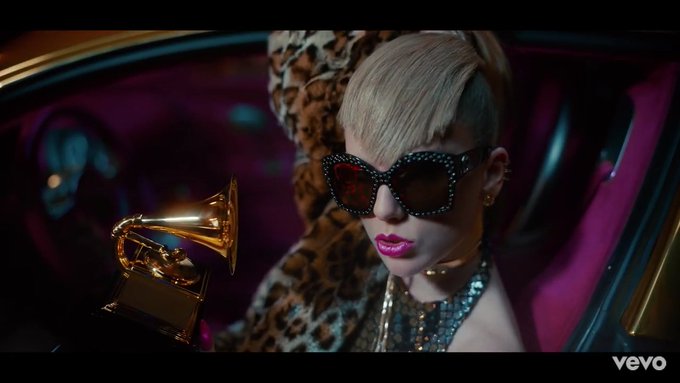 Sebastian @Sebastian120313
Obviously this is a reference to @katyperry from @taylorswift13 in her new music video , because Katy has never won a grammy!#snake

Jake Updegraff @OnAirJake
Taylor Swift holding a Grammy in her new music video is CLEARLY a dig at Katy Perry. She’s a SAVAGE. #VMAs
1:32 AM – Aug 28, 2017

Twitter Ads info and privacy
Taylor also dons a cat mask and is surrounded by a gang of cat burglars in one scene, a possible reference to Katy Perry’s love of cats and the fact her fans are known as Katy Kats.

In one of the videos more obvious references, Taylor’s back-up dancers rip open their jackets to reveal ‘I [heart] TS’ T-shirts, in reference to the same shirt her ex Tom wore on a romantic holiday last year, resulting in heavy mocking and laughter on social media.
There’s a less subtle reference to Calvin in there as well, though. When zombie Taylor is digging a grave at the start of the video, a blink and you’ll miss it moment reveals the grave is for Nils Sjoberg, the pseudonym Taylor used to co-write Calvin and Rihanna’s track This Is What You Came For.
She also wears a jumper emblazoned with the phrase, ‘Blind For Love’ at one stage, which could be hitting back at accusations she’s a serial dater.

Embracing the accusation she’s snakey, which has come up during her feuds with the likes of Kimye and Katy, the star unashamedly paints herself as the Queen of Snakes, sitting atop a throne with snakes slithering around her.
She’s even served tea by a snake, a possible reference to her loyal fans bombarding Kim Kardashian’s social media accounts with snake emojis lately.
The pop star also goes heavy on the snake symbolism when it comes to her jewellery, wearing serpent-shaped rings to really hammer the message home.
Eagle-eyed fans have also spied an inscription on her throne reading, ‘Et tu, Brute?’ which is a line from Shakespeare’s Julius Caesar, which has come to signify being stabbed in the back by a friend.

oliver @oliverportillo_
Taylor Swift sitting on a throne, surrounded by snakes, and being served tea by one of them in her new music video is iconic
9:59 AM – Aug 28, 2017

Hit The Emz @EmilyStrauch
Taylor Swift sitting on her throne with snakes surrounding her is probably the best shade throwing I’ve ever seen.
5:03 AM – Aug 28, 2017 · Boise, ID

Nani Ren Solo @Nani_Appleseed
Taylor Swift made snakes her servants. She made a snake give her tea. While she was wearing snakes. If that’s not genius i dont know what is
1:40 AM – Aug 28, 2017 · Arica, Chile

The old Taylor is dead

The overriding theme of the video is the fact Taylor has shed her old personas and emerged as a new one.
It pokes fun at her reputation, opening with a tombstone bearing the phrase, ‘Here lies Taylor Swift’s reputation’, and including a moment where Taylor declares: “The old Taylor can’t come to the phone now. Why? Because she’s dead.”
She crushes her old personas in a visual which sees her literally standing on top of a pile of her ex-music video characters, stomping them into oblivion.
And she pokes fun at various stories and themes about her over the years including accusations she practises an awards show ‘surprise face’ and always plays the ‘victim’.
Lining up all her old music video characters together, the You Belong With Me Taylor adopts her best surprised face, prompting Out Of The Woods Taylor to swipe: “Stop making that surprise face… it’s so annoying.”
There’s also a swipe at Kanye West rapping, “I made that b***h famous” when Out Of The Woods Taylor warns nobody should ever call her a “b***h”.
And another Taylor snipes, “Oh stop acting like you’re so nice, you are so fake”, while a third snarls: “Oh there she goes, playing the victim again.”
Taylor’s new album, Reputation, is released November 10.

VMAs 2017: Kendrick Lamar's killer performance of 'DNA' and 'Humble' proves why he was the night's big winner